Three points on a time curve

It is early February and after looking around ten apartments in two days, apartment number 3 on the list is picked as a suitable abode for the near future. As usually happens when one moves into an apartment which has a view of the sea, you take out your camera and capture few moments. Freeze that particular second as it ticks by. The window of the bedroom is opened, the sea captured and as an afterthought I click the street below. Window closed and seconds tick by. 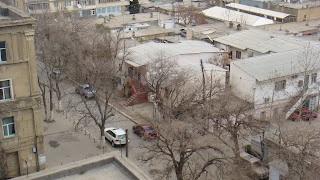 If someone asks me the postal address of the place where I live, I will not be able to tell from memory. In fact I won’t be able to tell the flat number I live in. It is not written at the house entrance and the one time I read the flat number and the address was in the SMS which Yana sent me after I had moved in and which I looked at only once while filling in a checklist for the apartment some time ago. I know it’s on seventh floor or rather floor number 7, you step out, turn right and the first door on left hand side. That’s the door the key which I have works in. The building is one of the four blue buildings on ‘sixth parallel’ as I learned after a little struggle with the taxi drivers. Natik helped me out with the parallel concept. That means now I know how to get to the place I have my lodgings at and since no post is ever coming my way here I may live next three four years, or whatever time I have to, here without the need to look at the address of the place.
The time moves on, as it has a bad habit of doing, and one day a snow-storm arrived, rather unannounced. The window was opened once again, this time to see the snow and the snow storm. First snow storm and first real-snow for me. Otherwise, first snow was a couple of weeks ago when I was still in the staff house. It was in Baku as well but it was just a little snow and not really as exciting as this big storm. And again the camera came out to click the city covered in white. And as an afterthought again I clicked the street corner down below. The window is closed and the time moves by. 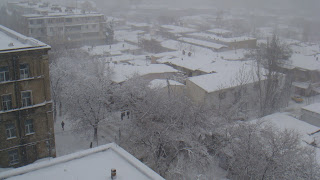 From the blue buildings to ‘Mothercare’ it is about a 10-15 minutes walk. 15 if I start well ahead of time and can afford a royal stroll. I make it in 10 if required. The bus drivers have by now got used to my just-in-time approach and usually cut me a few seconds slack. Though one time one of them did say something in Azeri pointing at his watch and I pretended it was so hard to understand what he was saying and just smiled a guilty little smile and buckled up for the ride to the office. Buckled up, and sometimes eyes closed, till 10 Salyan Highway.

On the walk from the blue buildings to Mothercare I have made few unspoken-to-acquaintances. Taxi drivers waiting for their respective passengers at the corner next to blue buildings, seven in the morning every day. The cleaning ladies on the street with their scarves saving them from the dust which they freely distribute to one and all who dare to cross by, I have to make a run when I cross. The meat shop guys getting ready to execute various bulls and lambs in the way that would make the kill suitable to eat for the people with faith (or without). The three old ladies walking their leisurely walk in the opposite direction (lately there have been only two). One young lady walking her rapid quick pace, the old man just finishing his cup of tea and getting ready to open his shop (I have now started nodding a greeting to him), and various other not so mobile acquaintances including trees, houses, streets and roads. Ten to fifteen minutes of the morning, everyday.

Most of the beings (living and not so living) age in one simple straight line with time. Trees do get old but they have a habit of making it seem different. They are on the trail of time and on journey to death, but they have a habit to grow young and old every year in cycles. Grey, dark, green, gold. Naked, covered (in green and in white of snow if the nature wants so). Full of bounty, empty and dry as desert. They have their way of beating the straight line of time. Or maybe time has put them in this curve of going in circles while moving on a straight line.
It is nearly five months since I moved into this home. Every now and then the window has been opened again. To let the Sun in. To let the air in. Once, uninvited, few flies came in as well which I had to, late at night, chase to stop all the ‘peeennnpeeennn’ in the room. The window opens more often on Sundays and so it was that the knob was turned today and after soaking in the view and taking few deep breaths of what I will have to say was ‘fresh air’ I looked down towards the street. And for the first time I took out the camera to specifically shoot the corner of the street. 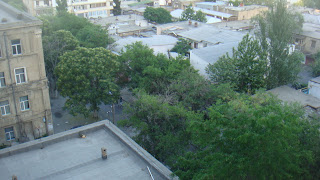 They say if you have two points you can draw a straight line. But time hardly travels in straight line and even though today I captured the third point, only time knows if this point will find a place on this particular straight line.
at June 11, 2010

Email ThisBlogThis!Share to TwitterShare to FacebookShare to Pinterest
Labels: of places

A picture tells thousand words. I didn't read this one , but quickly saw the pictures and could guess why it called , 3 points on a time curve.

Let me read though.