IN THE COMPANY OF PATRIOTS

As he stood along with his ‘people’ at Shambhu border, a tear gas shell hit him – first his right hand and then his leg. It is over 75 days since, the injury to his hand isn’t fully healed. Yet that hasn’t affected his spirits or his pen. The little diary he always carries with him is full now and a second diary is fast filling with revolutionary songs he has been busy writing and singing at Singhu morcha.

Bapu Jagraj is now in his sixties. He was sixteen when he composed his first song in memory of Shaheed Bhagat Singh. Bapu has since written hundreds of songs – some have found space in newspapers and magazines, but Bapu hasn’t made any money of his writings. He sings at various morchas and a few melas.

Bapu says that the present struggle is for farmers and farm labour as the black laws impact both. Himself a farm labourer when asked why is he here? ‘Haq lain layi turna painda hai’ and he sings a few lines.

Along with his own compositions he sings songs and poems of other revolutionary poets like Sant Ram Udasi and Lal Singh Dil. One evening, as he starts singing ‘Kirti kisano kathe hoke ladhiye, Karaan pranam lahoo rangi madhiye’ the audience starts clapping to the beat. He immediately stops. ‘Giddha nahi pauna, eh sangharsh hai.’ The gathering gets the message. He starts from the beginning. Every time he sings a song, he concludes with ‘Jit Lokan di.’

As I look at the injury to his hand from the tear gas shell, he says proudly, ‘Satt vaji, par main hath vichon jhanda nahi diggan ditta.’

There is space at the bottom of the page – for a tenth name. Kisani Lehar – 10. S. Jagraj Acharwal will sit in the company of the nine easily, proudly and honorably. 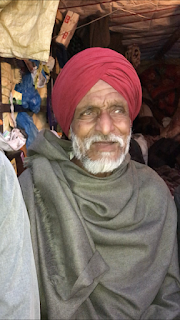