SIX MONTHS IS A LONG TIME

Ravi Choudhary of PTI was nearby as the lathis of the security personnel swung. Of the many images he clicked one will acquire a life of its own. Rahul Gandhi will tweet it – pointing how Modi has pitched Jawan against Kisan. BJP IT cell – Joseph Goebbel’s of our times - will use its superpower of propaganda to declare Rahul Gandhi’s tweet as propaganda. In a rare act of showing spine in Indian context Twitter will flag BJP IT Cell post as ‘manipulated media’.

The farmer in the image could have been any of the lacs of farmers there that day. But thanks to that little twitter battle, Sukhdev Singh Sangojla from Kapurthala Punjab, will find himself a face of farmers movement. Soon the image will travel the world, be part of social media posts and news stories, become profile picture of countless accounts and from the digital space quickly hit the printers. A variety of posters carrying the moment when state’s brutality is about to leave its marks on the skin of common man will appear. Every other trolley at various tractor-trolley townships around Delhi will carry this image. 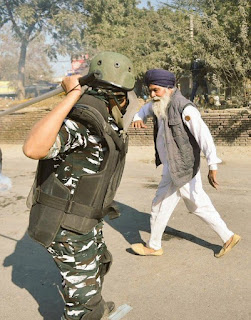 It is mid of January, nearly 50 days since the reinforced fiber batons left their marks on his arm, back and leg, I sit inside his trolley in conversation with others who have made this trolley their home. Sukhdev Singh climbs into trolley, returning after taking a bath. He wears a white kurta - probably the same that took the beatings with him. He is still in towel and as he steps in, I see the mark. The evidence that the reinforced fiber baton left on his body. Instinctively my phone rises and I click. 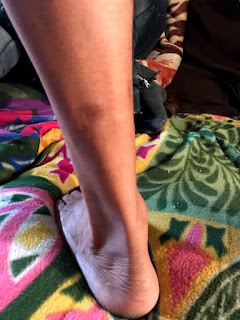 Later that afternoon we head out towards the front of the tractor-trolley township, towards the barricades where Ravi Choudhary clicked that vital moment. After showing me the place where he and some other farmers got lathicharged Sukhdev Singh wants a photo with the security personnel. After taking the photo I ask the Rapid Action Force personnel if they recognize him. Negative. When I tell them, he is the farmer whose image went viral – some of them hesitantly declare that it was a fake photo. BJP IT cell is a powerful being! 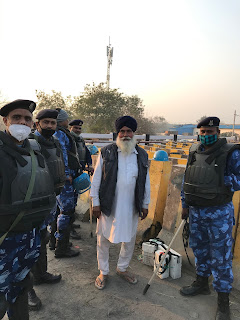 There is a large poster carrying the image on the trolley next to Sukhdev Singh’s trolley. This is where he stands when folks ask him for a photograph. He is an ordinary individual; this photo makes him extraordinary. Standing next to the photo is when the others see the extraordinary in him. The posters travelled to various corners of Punjab on the returning trolleys. One such poster found its way on the little black gate of his home. This poster makes this ordinary village home extraordinary.

Last evening, I called Sukhdev Singh. He was in his usual cheerful mood.

‘All is well. Sab chardhi kala.’

‘It’s been six months. How much longer?’

Six months is a long time. Lest we forget.