Suresh Chand arrived at Ghazipur border on 26th November 2020. He hasn’t gone home since. It has been a long vigil.

A mattress and a blanket atop the main stage of the Ghazipur border tractor-trolley-tent township of resistance has been his home for almost 13 months. The stage has run all these days, somedays the line of speakers an endless stream and somedays a small trickle. Speakers changed daily, stage coordinators change regularly, even the stage itself changed a few times (from the initial open stage, to hurriedly put up tent, to a stronger wooden structure to this current permanent metal shed), but amidst all these changes Suresh Chand has been a constant. He got on this stage when he sat on a hunger strike. ‘After three days Tikait ji gave me a glass of milk and said, this is a long battle, don’t stay hungry.’ He accepted the milk and the responsibility that came with the call – this is a long battle. At the same place he sat in silence for 30 days. From the stage where speaker after speaker challenged an authoritarian and hostile regime with their words, Suresh Chand joined in his silence. The hunger strike and the silent protest made this stage his home. This is where he has lived for nearly 13 months. He became the caretaker of the stage, the shed and of this Ghazipur tractor-trolley-tent-township of resistance.

When I ask him to summarise his thirteen months experience here he says, niswarth sewa dekhi. He has taken this lesson of selfless service to his heart. ‘Ab to mann hai ke bas kisi gurudawre pe sewa karoon.’

During those days of hunger strike and silent protest, Baba Mohan Singh ji, who runs a langar here, tied turban on his head and presented him a portrait of Guru Nanak. Since that day Suresh Chand has made the turban a part of his self. Suresh Chand now sports a long flowing beard along with this turban (some even address him as Suresh Singh now).

A short distance away from the main stage, just outside the shed in front of the main stage a DJ is playing the songs of farmers revolution, where on this unlikeliest of Dance floor - NH-24 Delhi Meerut expressway, the unlikeliest group of dancers are showing that not only sewa, they have picked up some bhangra moves as well from their Punjabi brothers.

Last fifteen months the artists of the region, specifically Punjabi and Haryanvis have delivered songs on demand, fit for the day and occasion. From the calls to get ready ‘ailaan’ and march towards Delhi, to capturing the spirit of the march in farmers anthem, to songs of patshah and patience and sacrifice when the going got tough, to the victory songs of last few days.

More than winning Delhi, it’s the hearts from all over India and world that they have won that the generations will remember.

Suresh ji (Chand and Singh) asks me to sign in a register. This is his attempt at a record of who all came on this stage. Three thick registers, organized day wise. The header for today’s page says Day 379.

Any estimate on how many people visited Ghazipur border? I ask him.

‘There is no estimate. There is no state in India from where people didn’t come. They came from every state. UP Rajasthan, Haryana, Punjab, Uttarakhand – from here from every village. And a lot from Bihar, Assam, Kerala, others. And Australia, America as well. People came from far. Not possible to estimate how many people came here.’

From among these uncountable people a group set up a metal artwork, a martyr’s flame – but with plants, near the stage. In his simple words he shares a big lesson. “Paude to sab lagate hain, lekin sab paani nahi dete.’ A few days after the installation of the artwork he adopted the plants and like everything at this morcha these came under his care.

As I walked the length of this tractor-trolley-tent township this evening, amidst the skeletons of what were homes for over a year, with the tarpail covers removed and folded, with the bamboos and poles getting disassembled one by one, I looked for a souvenir. Something to take home – a physical remembrance.

It was still an incomplete mission, till I asked Suresh ji for a plant.

Carry the flame of morcha a little longer, till the plant lives, and maybe a bit longer. ‘morche ki nishani’, all I say.

He gives me the plant in the tricolor pot.

That’s what this movement have been. Caring for the tricolor, in a far truer way than we will ever know (and what the propagandists will never allow us to understand).

The first homes set-up here at the Ghazipur border were under the flyover. A place that will forever be known as Kisan Kranti Gate. Those were the roots from which this township sprang to spread along the service lanes and atop the expressway. One of the first tents to take root at one corner under the bridge was of Rajbir Singh Pehalwan. Nearly a year back, when I first met him he had said, ‘Bees saal pehalwani ki hai. Peeth nahi lagne di. Morche ki bhi nahi lagne denge. Kisan ke saath Sarkar ki jaayati nahi chalegi. Ye kale kanoon waapis honge tabhi lautenge.’

He has been associated with BKU from Baba Mahendar Tikait’s days. He loves to share the stories of his time with him. There is pride in his words and in his eyes whenever he talks of the past. With such roots, uprooting this township, was never easy – not without the blessings from these roots.

I ask Rajbir ji how he feels today.

He has played his part. Over many decades. He hands over the baton of struggles to the pehalwans of current and coming generations. To keep his pride and to keep theirs. To be the real sons of soil, like he has been.

They leave for their homes now. But they leave behind lessons and legacy. Something we can take care of, and water and see the tree bloom. And even though we didn’t face the jets of water cannons against our bodies, or felt the force of tear gas shells, or had to tackle the iron barricades, concertina wires, concrete blocks, or cross dug up highways, or had to take the blows of lathi charge, or have the cars of arrogant ministers run over us, or spend over a year on roads under harshest the elements have to offer - rainy freezing winters, scorching summers, dust storms, or even see our homes of tents and trolleys burn in fire, or see 700 of our brothers/sisters die for a cause, or wonder about an apathetic citizenry around us, or deal with an inconsiderate and hostile government, or live away from family, friends and most importantly our life - our fields for over a year, we can be one with them. If we choose to take care of the lessons and the legacy, we can become one with all the humans of the farmers movement.

We can be one with Laadi Ismailpuriya who walked and served the morcha barefoot for 13 months.

We can be one with Gurpreet whose little daughter didn’t recognize him when he met her last week after 12 months.

We can be one with Ramesh devi, whose husband will not return, like the fathers/mothers/husbands/wives/sons/brothers/daughters/sisters of the families of the 700 plus martyrs.

We can be one with four sisters – Gurjaspreet (13), Prabhjot (11), Harmanat (7) and Harveer (6) – who helped their father for six months serving water and juice at the morcha.

They have planted the idea. It is for us to cherish it, to nourish it.

We can be one with the millions of stories that made this morcha possible.

It is for us to become a Human of the Farmers Movement.

His has been a long vigil. It continues. For now. 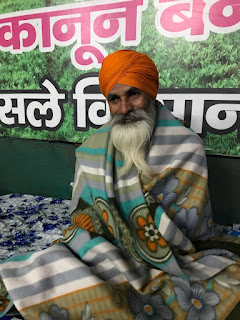 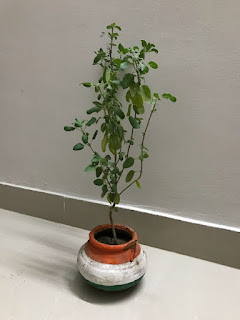