Tau Chandar is 82. He joined police in Delhi after independence. Pointing towards the highway and the buildings all around he says, ‘ehan kuch na tha tab.’

One day ‘daroga’ of his police station took two hundred rupees bribe from someone to get rid of a relative. Tau was close by and as the conversation proceeded Tau felt ashamed and angry at the uniform. When the daroga pocketed the money and agreed to do the needful Tau couldn’t take it anymore. Tau tells me he was strong in those days. He got hold of the daroga and thrashed him there and then. Daroga threatened him that he will get him transferred. Tau resigned the same day. As he left the police station, he told the daroga, ‘lele apni naukri chutad mein.’ As Tau remembers his parting shot at the corrupt system, there is youth and pride in his voice and a million watt smile on his face.

He is happy now, having worked his fields for decades, surrounded by children, grandchildren and great grandchildren.

Why is he here? ‘Gandi sarkaar laayi hai. Do mahine se baithe hain.’

What will happen next? ‘Ghadar hoga.’ 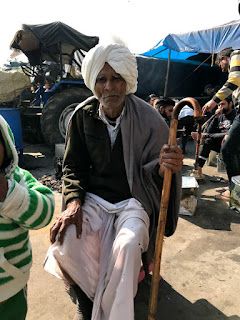