‘Marne ke liye bahut acha mausam hai.’ Camping with farmers for two months at Singhu tractor-trolley township brings the krantikari poet out of everyone. But these words don’t belong to any ordinary krantikari.

Dr Ashok Sharma, Senior Medical Officer with Rajasthan govt, a gentle, kindly, almost divine soul, has a special place in his heart for his patients. And the patients reciprocate the relation, to the point that last two attempts to transfer him had led to protests by locals and his transfer was stopped. Since the Covid lockdown he handled 29000 patients till end of November, without a break and without a leave day.

As he was getting ready for a small break, he heard of the farmers protests and their camps at the borders of Delhi. Something tugged at his heart. He applied for a week’s leave – Dec 9 to Dec 15. The leave was denied by his superiors. But that tug at his heart became a strong pull - he submitted his retirement, VRS, papers.

He got the seats of his van removed, threw in a mattress, and his mobile camp-clinic was ready. Few friends contributed and 1lac was raised for buying medicine. Kuldeep Singh, a young medical attendant/driver joined, and they were on their way from Udaipur early morning December 9. That evening they parked the van at this stop, deep inside Singhu tractor-trolley township, after a journey of 744km and the tyres have not moved since.

He sees 40-50 patients every day. And his patients, the farmers, have adopted him as one of their own. It is like his transfer story – there is no way they are letting ‘Doctor Sahab’ go to Rajasthan without first showing him Punjab.

When a news channel reported about him not getting leave, Rahul Gandhi intervened, and Rajasthan government approved his one week leave. Now they call him every week asking for his return date. They have not accepted his VRS yet.

There is a rush around his van in the evenings. Cough, cold, back pains, loose motions, BP and sleep problems are the common concerns. An elderly walks up and asks if he has cream for mosquitoes. Dr Sharma doesn’t keep it in his stock, but without a second thought he digs under the seat and takes out odomos from his personal kit and hands over. When there are no patients, he reads Gandhi.

‘When I planned to come here, I didn’t know it would be this important for me. I feel it is as if all my life was preparation for something. Now I know. Being here was the purpose of my life.’ 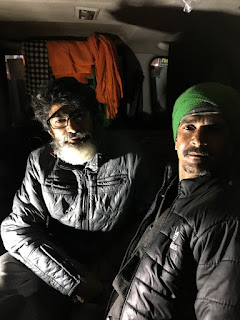