It is dark. The tractor-trolley township at Singhu is asleep (mostly). A solitary figure walks its lanes with a stick in one hand. As he crosses an unlit section of the narrow muddy service road, which sees all the local traffic in the day, he turns on the torch light. Occasionally, he blows the whistle that hangs around his neck.

‘In the first few nights after reaching here, there were some incidents where tractor tyres were punctured. I started spending my nights walking along the camp. Initially I walked for a kilometer or two in one round. Now I walk longer route.’

His longer route is a round of about 7-8 kilometers. He starts at 8pm. He stays on his duty till 5am. He does five rounds during this time. 35-40 kilometers, every cold, foggy, wet, wintery night of this festival of resistance.

Wherever he crosses other group of volunteers, or those who are serving overnight langars – they greet him, they ask him to come sit with them - a talk, a story, a cup of tea maybe, next round he says.

Meet Bir Singh, 62 years young, with a spring in his steps and with God in his words. Walk with him. By the end of that one round of 7-8kms, you would have learned much from the ocean of knowledge that resides in this humble servant of society. He talks politics, he talks society, he talks of Farid, of Kabir, of Nanak, of Gobind, he recites them and explain it with the devotion of a beloved. He talks humanity. 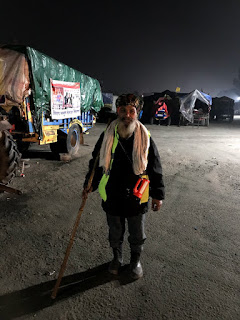