She has spent her day walking through the lanes of the tractor-trolley township. It has never been like this for her. The food is aplenty. She picks and choose – she is developing a taste! Now she walks back to her resting place. In the harsh winter, the little corner with plastic and rugs underneath and a plastic overhead is the most comfortable it has been for her ever.

He returns to his tent after a day of volunteer duty at the stage. She gets up and rush to him, she squeaks like a little child, her tail hasn’t wagged with this much excitement ever. He pats her, humors her, plays with her.

Back in Punjab he has already adopted two strays. He hasn’t named her yet, but it appears a third one is on her way to join the other two. 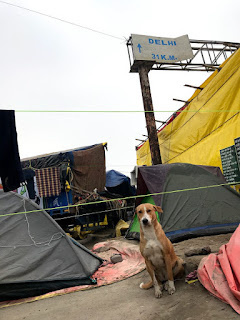