THE TOUCH OF PARAS

Parasdeep’s day job is home care of elderly and patients. Covid ensured he stopped getting called into homes. It was not a regular work anyways. Alongside he sells popcorn in the evenings. The setup is mobile – the roaster on wheels, fit behind his motorcycle - and he drives from village to village. His family doesn’t own any land. He isn’t a farmer. Yet he wanted to contribute to the farmer’s movement. Few friends helped collect 9500 rupees, and along with whatever materials he had at home he left for Singhu.

A few weeks around Lohri his sales are better. When his mother reminded him that he shouldn’t miss the festival sale period he promised her to be back in 3 days. 9500 rupees won’t last that long anyways.

Couple of social media channels covered his popcorn langar. The videos circulated around and reached his village. At the end of the third day, as he was getting ready to pack-up and return, he received a phone call from his village panchayat. They thanked him for showing them the way. And told him that a tractor-trolley from the village was on its way. He won’t need to shut down for the lack of funds. The popcorn langar will continue for as long as he would like to continue.

‘Then it will continue till the farmers are here.’ What about your promise to your mother to get back in three days? ‘She is very happy now. She said I can do sewa as long I need to.’

Two weeks after reaching here, he continues the sewa, as youngsters from his village join him and help. A few elderly from the village sit in the trolley, watching them with pride. It took a Paras’ touch to turn their youth into gold.

The roaster has run the cycle, the corn is ready, it puffs and expands and bursts out. Corn like masses. Masses like corn. All it takes is a touch of Paras. 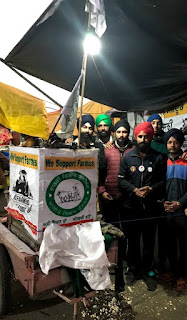