A few days back, while looking for the meaning of a verse, I scrolled through Navtej Sarna’s English translation of Guru Gobind Singh’s Zafarnama. Zafarnama, the ‘Epistle of Victory’, was written in Persian by Guru Gobind Singh to Aurangzeb, sometime in 1705.

In its introduction he writes – “An understanding of the Zafarnama presupposes some familiarity with the immediate historical events it refers to—the battles between the Sikhs and the Mughal army along with the supporting hill rajas, the evacuation of Anandpur by the Sikhs on the basis of false oaths sworn on the Quran by the Mughals, the historic battle of Chamkaur, the martyrdom of the Guru’s four sons, and so on. To grasp the full philosophical message of the Zafarnama it is necessary to delve deeper and to trace, even if briefly, the emergence of the Sikh faith as an independent religion as well as its development as a political movement that ultimately challenged Mughal rule in northern India. In short, one has to go back to the time when Guru Nanak (1469–1539) began the moral and spiritual renaissance of a populace steeped in ignorance and superstition. This renaissance was to become, under the guidance of the tenth Guru two centuries later, a miraculous transformation of the human spirit that would see an oppressed people fight bigotry and religious persecution with scarcely imaginable courage.”

On this cold dark late December evening at Singhu Border, thousands sit facing the little stage where speaker after speaker come and speak/sing from Gurbani, in remembrance of the sacrifice of the two younger sons of Guru Gobind Singh. One of them highlights the same point that Navtej Sarna makes in the last line above – The Gurus fight wasn’t against another religion, they fought persecution and bigotry. They fought a tyrant and the tyrannical policies of a throne.

The verse whose meaning I was looking for –

You killed my four sons:

What difference does that make,

When after their deaths there still Remains behind a coiled snake?

Walking along the tractor-trolley township, under the metro line at Tikri, I encountered a coiled snake. Pasted on a poster, held aloft by a group of youngsters the words read -

“Oh you with 56inch chest, we will burst your bubble.

Taking care of 112inch snakes, is our daily struggle.”

The farmers have protested for many months now – first on roads and railways tracks without any relief and now for over a month at the borders of Delhi, under elements in biting cold. It will be prudent for the Delhi throne to wake up, before the coiled snake wakes up and listens to the most often remembered verses of Guru Gobind’s Zafarnama.

When all has been tried, yet

Justice is not in sight,

It is then right to pick up the sword,

It is then right to fight. 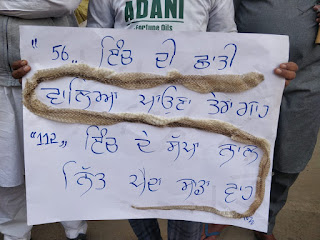 Having first been devised in France over 200 years ago, the game has since labored its means into each nook of 메이저사이트 the planet. As is typical when casino video games spread so vigorously, varied rulesets have subsequently shaped. The most popular are European Roulette, American Roulette and French Roulette.