FARMERS MOVEMENT – A WHEEL OF DHARMA

Noida Gate or Gateway to Noida on the Noida Delhi carriageway at Chilla border, the metallic gate made of multiple inverted arches in blue and white, welcomes people to Noida, in the presence of Gautam Buddha. The white marble statue of Buddha sitting in padamasna with his hands in ‘Dharmachakra mudra’ is placed in the middle of the road, next to the gate.

This is also the site of the protest by farmers. They have been here since the beginning of December. One side traffic leading to Delhi has been blocked. When the chief of Bhartiya Kisan Union, BKU (Bhanu) met Rajnath Singh and declared that they will open the traffic his union saw open rebellion and nearly 400 members resigned. His son Yogesh refused to comply to his orders and went on an indefinite hunger strike. When I drove to the location the traffic on this side was open, the number of protestors having reduced significantly after the split in the union. Police outnumbered the protestors by 2 to 1.

Rajwinder Singh, a farmer from close to Lukhnow, said that they have more farmers on the way and they will block the road again the next day.  By next evening they had sufficient numbers to do that. The morning after that I visited again. The police barricading started nearly ten kilometers away on the expressway. Any vehicle which looked like carrying farmers was being stopped and checked. Traffic was diverted about a kilometer ahead of the Chilla border. Few police officers were considerate and let me go through at the mention of ‘langar.’

Yogesh, the UP unit chief of BKU Bhanu, in his fifth day of hunger strike looks cheerful as he stands amidst a group of fellow farmers. He greets me with a big smile. His health is fine for now (doctors have been checking on him regularly, ready to do their duty in case situation demands). He is positive that the farmer demands are genuine and that they will not leave till these laws are repealed. On why the number of farmers is so low here he says that UP administration has made it very difficult for farmers to reach here. Their tractor trolleys are being confiscated. All their village and block level leaders are literally under house arrests. One of the local leaders who reached says that the local police officer at his block has been suspended after he managed to evade their surveillance and reach the protests.

There is another union camping nearby at Dalit Prerna Sthal. For now, this group is holding onto one side of the road with whatever limited numbers they have. Unlike other protest sites there are no stages or speeches here. There are no big langars here either, they have a makeshift chulha on pedestrian walkway acting as their kitchen.

I check with the local gurudwara. They say that they supported the protestors initially, but since their leader joined the govt side even the gurudwara team felt a bit betrayed and stopped sending help. Now that these guys are showing some conviction again the team feels they will start their help again. Even the gurudwara management has been advised (unofficially of course) to not support the protestors but they do it without making it too obvious.

“Dharmachakra in Sanskrit means the 'Wheel of Dharma'. This mudra symbolizes one of the most important moments in the life of Buddha, the occasion when he preached to his companions the first sermon after his Enlightenment. It thus denotes the setting into motion of the Wheel of the teaching of the Dharma.”

As this paltry group of farmers, a part of a larger farmers movement, sit facing the Buddha and his Dharmachakra, they have set in motion their very own wheel of Dharma. 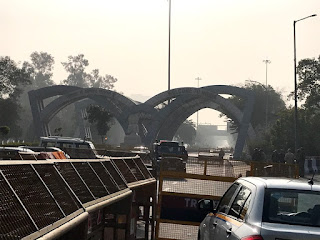 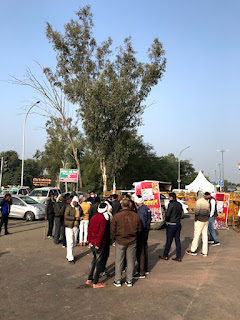 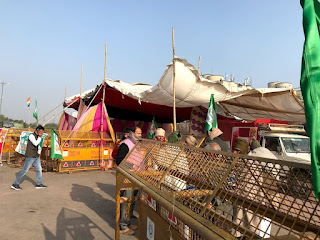