Google map shows a rather easy route to the protest site. Straight to sector 62, get on the expressway and in 6 km at the Ghazipur border. But google doesn’t account for UP police’s arrangements. All entrances to the Meerut-Delhi side of the expressway are sealed and even the road itself is barricaded at multiple places. As I take the service lane and turn into a narrow lane leading in the general direction of Ghazipur I see a group of 50 odd BKU flag holding youngsters having a confrontation with the police at that barricade. They make it to the protest site much faster than I will. There is strength in numbers.

The largest meat mandi (fish/murga/bakra) in the region and a qutub minar high hill of waste offer enough opportunities for the sky to be full of crows and black kites. These birds, surviving on refuse of the city and the refuse of the meat mandi, have something new to behold from the exclusive view in the skies. A mini township of tents and trolleys.

I sit on the edge of the expressway and listen as speaker after speaker address the gathering (sitting on mats on the expressway). Rakesh Tikait of BKU (Tikait) addresses the gathering. Brijendar (who apparently is from another union) doesn’t allow me to listen to any word Tikait has to say. He has lots to say himself, but with the background sound from speakers I barely understand one of every five words he has to say. What I understand is that he doesn’t like Tikait. He thinks he will sell out – that he is just waiting for the right offer.

A little while later I understand his grudge. Behind the stage where Tikait addressed the crowd, there is another stage. Set up by two unions. Till a few days back they were sharing the same stage till Tikait spoke against the leaders of these two unions, especially against VM Singh of Rashtriya Kisan Majdoor Sanghathan. Although both the stages speak of the same demands – repeal of the three farm laws, for the time being they speak from different stages. A little while later I find another small stage of another union, with the same demands.

The mood at Ghazipur, like at Singhu is festive. There are many langars, a medical camp, a bookstall, a group of young nihangs doing gatka, media, and plenty of police and security personal walking among the crowd, partaking the langar (and hopefully keeping watch). There are youngsters and there are elderly, though not many females. A city lady has her camera out and is walking through the crowd, clicking faces of the elderly from up close – as close as few inches sometimes, of farmers talking, of farmers eating, of farmers sitting – she is spoilt for choices – there are so many faces (what was always out of sight, is so close to it momentarily). Little children from nearby shanties are having their fill from langar. Many poor are standing on the edges with their collection of plastic waste – they seem to have abandoned the landfill for the day to collect the disposable plastics here. 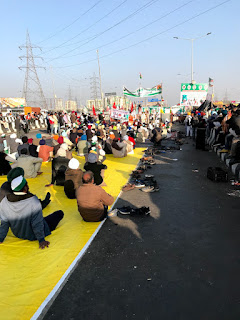 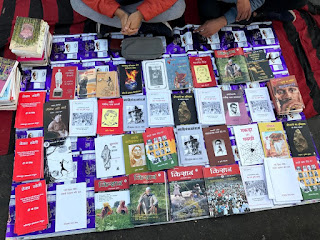 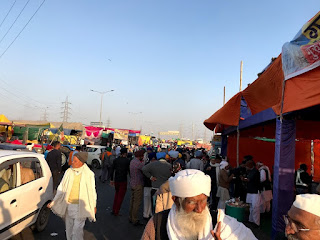 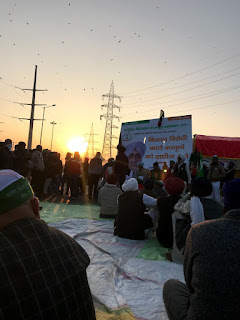