A MEMORIAL AT SINGHU BORDER

Today, 19 December 2020, Sikhs all over the world commemorate the sacrifice of the ninth Guru, Guru Teg Bahadur Saheb. Hind-di-chadar Shri Guru Teg Bahadur sacrificed himself standing with and for the weak, standing against a tyrant.

As is the fashion these days, politicians appropriating historical and religious figures, in January 2020 Congress government in Punjab announced a year long celebration of Guru’s 400th birth anniversary (April 2020 to April 2021). Not to be left behind, Akali dal (then a part of NDA govt at center) got the Govt of India to announce a nationwide celebration of 400th birth anniversary – with the President making the proclamation in his address to a joint sitting of the Parliament. In November 2020, Delhi team of Akali Dal (who was by then out of NDA govt) started six-month long celebrations. As we approach April 2021, every politician will line up with big words proclaiming Guru’s legacy – with a turban wearing Modi leading the pack.

According to Delhi tourism website – “With a view to beautify all the entry points of Delhi, Government of NCT of Delhi has set up Guru Tegh Bahadur Memorial near Singhu Boarder (G.T.Karnal Road) National Highway-1.”

The police barricades which indicate the start of the tractor trolley township of the farmer movement, are placed where the memorial starts. As one walks to join the lacs gathered, one first crosses the Guru’s memorial. If one steps inside a tall khanda rising from the ground comes in view. “A 24 meter high central pylon with petals at the base represents the Guru & his strength and the three “C” arches denote his three followers and the monoliths represent the 10 Sikh Gurus’ with their sayings inscribed on them.” The words of Gurbani on these ten pillars give messages like Sarbhat da bhala (welfare of all), kirat karna (hard work and honest living), naam japna (remembering God), vand chakna (sharing with others), istri samanta (equality of women), etc.

As part of six-month celebrations Delhi Akali Dal team has planned a nagar kirtan (a procession of devotees) from birthplace of Guru (Amritsar) to place of his death (Delhi) in February 2021.

One of the ten pillars inside the memorial say tenth Guru’s words under the heading ‘Deedar Khalse ka’ – ‘Behold the pure.” ‘Khalsa mero roop hai khas, Khalse mehi ho karo nivas’ ‘Khalsa is my true form Within the Khalsa, I abide.’

And may the people of the land continue to remember what the Guru stood and sacrificed for. 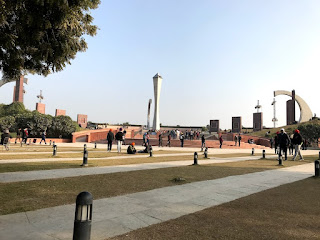 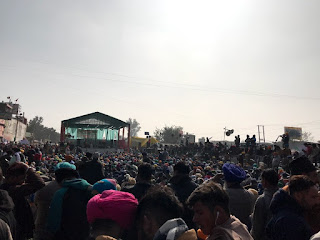