The sangat, pious gathering - for every gathering at a langar is pious, sits in rows. A young man serves roti. ‘Waheguru ji prashada.’ Those serving believe that they are serving food to God.

Elderly Baba brings his hands together as if in prayer and says, ‘Waheguru ji sawa lakh.’ Those partaking langar believe that it is God that serves.

Bebe, taking a break from sewa, looks at the langar and the sangat, and with folded hands says, ‘sade babe Nanak de veeh rupayie nahi mukde rehendi duniya tayin.’ ‘Our Nanak’s twenty rupees will last as long as the universe.’

At Ghazipur border as we walk towards a stall put up by a group of volunteers - Babe Nanak di hatti, ‘Nanak’s shop,’ I try to explain to a journalist the true source of funding of the farmers movement.

Young Nanak’s father gave him twenty rupees and sent him to learn trade. Nanak on his way to the market met a group of Sadhus. They were hungry, so Nanak fed them with the provisions bought with twenty rupees. When his father questioned him, he said I have learned the true trade, sacha sauda. These are the twenty rupees Sikhs carry forward the tradition of.

Before the harvest is packed at mandis to be weighed and sold, a portion is taken out for the gurudwara. When babaji from gurudwara comes in the morning and says ‘waheguru’ at the door - milk, vegetables, rotis rush to him with folded hands.

Guru Nanak in his travels encountered a village where residents were inconsiderate and harsh to others. He blessed them ‘May the village of Kanganpur prospers.’ In another village he encountered kind and gentle souls, who looked after each other and every passerby. Guru Nanak said to them, ‘May the village of Manakdede never prospers and stays small, may its residents scatter to other parts of the world.’ When his companion Mardana questioned him on these strange blessings Nanak said he hopes that the ill-will of Kanganpur stays where it is and the goodwill of Manakdede spreads to the whole world.

At Singhu border a speaker addresses the gathering. “It is as if we the followers of the Guru are blessed to be the residents of Manakdede.” Sikhs now call most of the world their home. And wherever they have gone they have taken ‘vand shakna’ ‘sharing with others’, and they have continued the tradition of those twenty rupees.

Khalsa Aid is but one of the many million offsprings of those twenty rupees.

‘Babe Nanak di Hatti’ has all kinds of supplies – from toothpaste, toothbrush, soaps, shampoos, hair-oil and detergent, to socks, warm cloths, blankets and even a large heap of desi waterheaters. I greet the volunteers and because I have to, I tell them I am from Sultanpur Lodhi. They all fold their hands and pause for a moment, not for me, they do it in respect for Nanak, in respect for where Nanak ran his hatti. ‘Tera tera.’ ‘Its all yours, I am yours, O Lord.’ 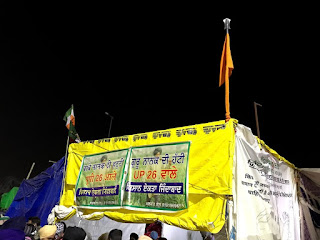