It is not that these barriers are too strong to stop their march, like they proved on 26th and 27th of November, it is just that they have decided to camp here – for now. But the administration, the state, the powers that be can’t help but think that they can ford this flood. So, they create these illusions - concrete blocks and metal barriers and a no man’s land in between.

On one side the guards stand in silence, on the other the rebels are a sea of celebration of human spirit.

On one side there are ranks – juniors standing attention to seniors who in turn stand attention to more seniors. On the other side they all are equal - their honor and words their chain of command.

On one side they all line for inspection at roll call and to salute their officers. On the other, there are no officers, but plenty of salutes to each other.

On one side the bodies are dressed in one color. The other side is a rainbow of colors.

On one side it is a colony with bated breath, a look of death. The other side a city teeming with life.

In between, the no man’s land stands witness.

And in the gathering of rebels, a few rebels jump into the no man’s land for a selfie. 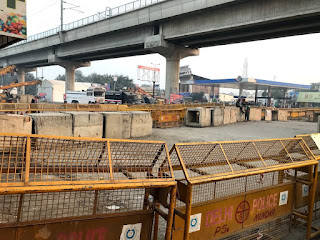 The following system seems at exploiting patterns inside the fee schedule over an extended time period. Free Slots Online No Download No Registration prompt play delivers all this without having you register for a service or download anything in any respect. + No value, providing fun and playtime, no strings attached. Online scratch video games and free prompt video games are here too. Over 30 scratchies from Hacksaw Gaming and some from NextGen could have you revealing 더킹카지노 prizes in an instant.